Fall In Love With America Again! - One Great Story 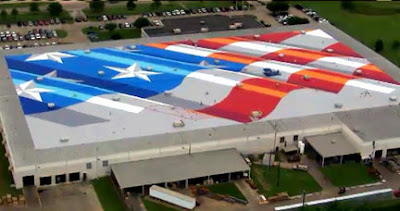 "I want to try to get people to love America," he said.
Read this great story - it fits right into our new series, 'Fall In Love With America Again!' (*Thanks Vince Taschetti for sending this to me!)

STATEN ISLAND, N.Y. -- All Scott Lobaido needed was 900 gallons of paint and one Texas-sized rooftop.

It was the perfect canvas for the all-American artist from Grasmere to paint his version of Old Glory, the largest he's ever done -- and he's done a lot of them -- and quite possibly, the largest anywhere.

His project atop the corrugated metal roof of Lamons Gasket Co. in Houston began on Flag Day, June 14. He completed it today, the Fourth of July, after outlasting the Texas sun as well as the wind and rains of Hurricane Alex.

It covers 3.5 acres, the size of five football fields.

"I've played the rain card and I've played the heat card when I've painted outdoors, but I've never played the hurricane card," said Lobaido, 45, on Friday while waiting for the weather to break. "This is something I've always wanted to do. It was just a matter of finding someone as patriotic as me."

He found that person in Kurt Allen. Born in England, raised in Australia and an American citizen since 2008, Allen has employees hailing from 22 countries. All 22 of their flags are hanging in an international array at his gasket factory. And he had a roof to spare in the shadow of William P. Hobby Airport.

A Houston mom, the mother of an American soldier, called the flag a "big Welcome Home" for her son -- expected to fly into Hobby from Iraq this weekend. "I cannot wait for him to see this," she told Lobaido last week.

Lobaido began his patriotic journey in 2006 when he traveled the country -- a beat-up Chevy Suburban and the nation's colors as his guide -- to paint the stars and stripes on 50 rooftops in 50 states.

"I want to try to get people to love America," he said.

Is his work finished? "Not yet," he said, "but when a kid comes up to me and shows me a flag they drew and what it means to them, well that's mission accomplished."

Fall In Love With America Again! is a documentary style broadcast, web and mobile based video/audio/multimedia series highlighting stories from across America - stories from small towns, communities, neighborhoods, streets, homes, rooms. It's all about what we think America is, who American's are, how we see ourselves, and how we welcome the world to our home.

The project includes live webcam updates, producing a feature length documentary film, broadcast series and special, live events, video/audio/multimedia content produced by us and submitted by folks all across America, interactive websites and social networking sites/communities, etc. It is a fantastic way to connect you and your advertisers to consumers/fans and it all starts in the heartland of America.