65&Older - New Multimedia Project Launched by Ramp It Up Entertainment. 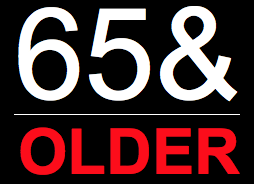 65&Older is a multimedia interactive project. Dennis will be interviewing 1500 65+ year old individuals (and their families, significant others, friends...) to learn about the paths their lives have taken and how they will be/are dealing with getting older.
The multi-year project will include a book with photographs, illustrations and short stories, video from each interview, a documentary film and broadcast series, a website and social media platforms to connect with others through similar passions and interests. Why this is a significant and an important project?
Seniors matter and they have plenty to contribute to our everyday lives. Sharing their wisdom, experiences, mentoring and influencing others, all priceless.

Think about this:
There are now more Americans age 65&Older than at any other time in U.S. history. The numbers are staggering. And how we (those under 65) interact with our senior citizens, could very will determine our future.
47.8 million! As of July 1, 2015, there were approximately 47.8 million senior citizens - 65&Older - in the United States. This group accounted for 14.9% of the total population. The 65&Older population grew 1.6 million from 2014.

According to recent data, there are approximately 901 million people worldwide who are 60 and over. By 2050, that number will reach 2.1 billion people, or 21.5 percent of the global population. Global AgeWatch Index recently ranked the top 10 places for older adults live. They are Switzerland, Norway, Sweden, Germany, Canada, Netherlands, Iceland, Japan, United States and the United Kingdom.  We, the US, have got to do better!
Dennis adds,
“After doing everything I could do to avoid this, I finally gave in. i joined the 65&Older group on March 31st, 2018! i now look forward to having the time to enjoy my “retirement”. (I’m only working 10 hours a day.) But this time off gives me time to reflect, think about where I’ve been, what I’ve accomplished, what I could have or should have done differently, my legacy.

And now I have plenty of time to WORRY! I worry about my parents, my wife, my kids, my kid’s kids, my sister, nephews, nieces, aunts, uncles, friends, my dog too, ending up alone, being a burden to others, having enough money. I worry about my thinning hair, my hearing - will I need a hearing aid, my eyesight - will I be able to keep driving, will I lose my teeth, will I be able to walk on my own? I worry about being alone, not being in love, not holding someone’s hand. I worry about never being kissed again! I worry about having to pee - a lot. And having to always know where a bathroom is, will I end up wearing an adult diaper? I worry about losing my memory and if I’ll forget everything...everything I’ve been worrying about. What will I forget, what will I remember?

And I worry about our country and the entire planet. Are we doing enough to help each other and work together to make this planet a safe, happy and healthy place to live - for generations to come?
I worry a lot! Maybe I worry too much?

I'm amazed by some of the 65&Older folks I have been meeting. Many have enjoyed incredible lives, accomplished so many wonderful things, contributed in ways that I only could have dreamed of. And the one common thread I keep hearing over and over again is have I done enough, could I have done more, will anyone miss me when I'm gone? Some of them asked if I knew of a good piano teacher, place to get their bicycle repaired, could I recommend a good book, red wine, a movie or if I have tried one of the new restaurants in town? And, there have been those who asked if I knew of an honest financial advisor, a good doctor, the best place to retire, the best place for assisted living?"

A history lesson:
After a meeting with the National Council of Senior Citizens, President John F. Kennedy encouraged all Americans to pay tribute to older people across the country by designating May 1963 as Senior Citizens Month. Every president since has issued a formal proclamation during or before the month of May in support of older Americans. In 1980, President Jimmy Carter issued a proclamation changing the name of this observance to Older Americans Month. This month continues to be a time to celebrate the age 65 and older population through ceremonies, events and public recognition.65&Older will engage, motivate and inspire us to celebrate Senior Citizen Day EVERY DAY!

To help support this project, click HERE!
Posted by Unknown at 8:04 AM